You are here: Home / Destinations / Surprising St. Louis: A Second Top Attraction in the Gateway to the West

We continue our countdown of the top St. Louis attractions with a story of what happens when people think big.

The Saint Louis Art Museum and its collection of more than 34,000 pieces is tucked away in the heart of sprawling Forest Park, just a stone’s throw from other popular attractions like the Saint Louis Zoo. Its iconic main building is the only surviving permanent structure constructed for the 1904 World’s Fair. Remarkably, admission to this sprawling and largely uncrowded gem is free to the public.

The top-notch collection here is massive. It did however leave us scratching our heads.  My friend Kim and I couldn’t figure out how a city of just over 300,000 people ended up with not only a top-tier art museum, but one that is free to the public. So, I started digging to find out. 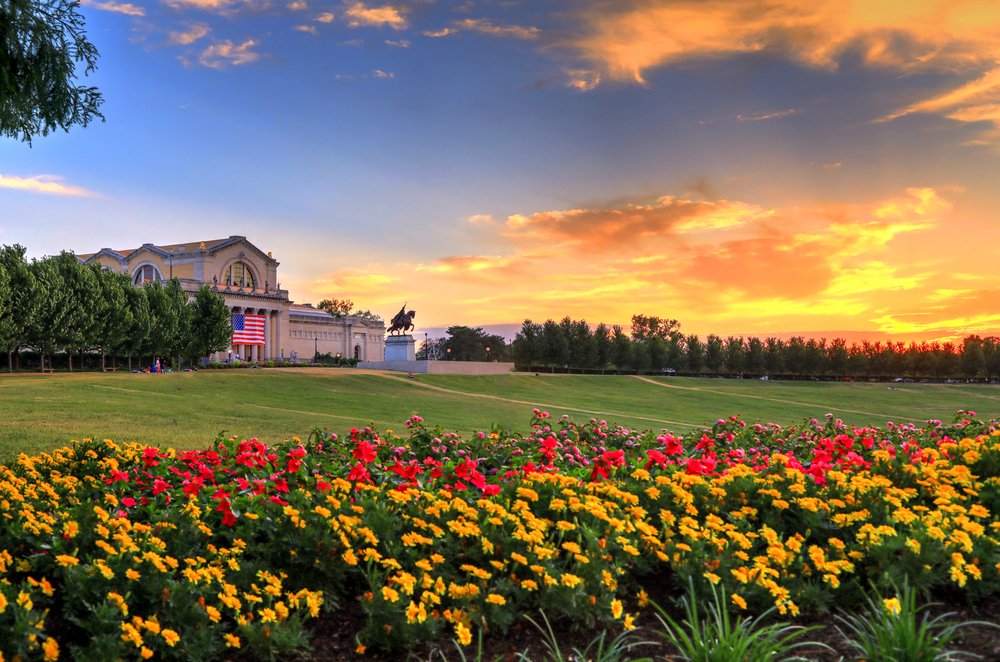 Living in Washington, D.C., I am a frequent visitor to the world-famous Smithsonian institutions, which are free to the public thanks to funds bequeathed over 150 years ago by British scientist, James Smithson. The Saint Louis Art Museum had no such founding father. Instead, it was the creation of a number of civic-minded individuals.

The museum was established by law in 1879 by forward-looking city leaders who thought the Gateway of the West should have an art institution of the caliber of the other fine arts museums being established in the eastern half of the country at the time.

The museum was initially established downtown as the St. Louis Museum of Fine Arts and run by Washington University. A few decades later, in 1900, a city ordinance was passed authorizing a museum in the city’s 1,300-acre Forest Park in the lead-up to the 1904 World’s Fair. The Fair, also known as the Louisiana Purchase Exposition, was held in Saint Louis to mark the centennial of the 1803 Louisiana Purchase (it was delayed a year to allow for greater participation by more states and countries).

The museum’s current main building was constructed as the Palace of Arts for the Fair, in response to lenders’ requirement that the art displayed at the Fair be housed in a fireproof building.

After the Fair had shuttered and its 19 million visitors returned home, in 1907 the public voted to pass an art museum tax to fund the museum. One year later, city leaders took over ownership and administration of the museum on the grounds that a city institution should be run by the city itself (its first director, Halsey Cooley Ives, did however continue to run it. He had to formally resign from Washington University in 1909 and was then hired by the city government).

In the middle of the century, the public voted to increase the tax, to set the institution on stronger footing. Later, in 1971 citizens of both St. Louis city and county voted to establish the Metropolitan Zoological Park and Museum District, approving a property tax that benefitted the financially struggling Museum of Science and Natural History, the Saint Louis Zoo, and the Art Museum (the Missouri Botanical Garden and the Missouri History Museum were later allowed to join).

With that vote, the museum’s name was changed from the City Art Museum to the Saint Louis Art Museum, to reflect the support that was being provided by both Saint Louis city and county (this was an important expansion of funding, as the population of county is around three times that of the city).

The museum continues to this day thanks to public support and also to civic-minded individuals and donors, who have contributed both their collections and their dollars. One such major benefactor was Saint Louis art collector, Morton D. May, who during his lifetime purchased artworks with the intention of rounding out the museum’s collection. May bequeathed that personal collection to the museum upon his death.

I want to thank Claire at the Richardson Memorial Library for shedding light on this interesting history. This story beautifully illustrates the power of local leaders and community members to shape their city. Why does Saint Louis have a top art museum? Because the community willed it into being.

You can read about another top St. Louis attraction here.

This website uses cookies to improve your experience while you navigate through the website. Out of these cookies, the cookies that are categorized as necessary are stored on your browser as they are essential for the working of basic functionalities of the website. We also use third-party cookies that help us analyze and understand how you use this website. These cookies will be stored in your browser only with your consent. You also have the option to opt-out of these cookies. But opting out of some of these cookies may have an effect on your browsing experience.
Necessary Always Enabled
Necessary cookies are absolutely essential for the website to function properly. This category only includes cookies that ensures basic functionalities and security features of the website. These cookies do not store any personal information.
Non-necessary
Any cookies that may not be particularly necessary for the website to function and is used specifically to collect user personal data via analytics, ads, other embedded contents are termed as non-necessary cookies. It is mandatory to procure user consent prior to running these cookies on your website.
SAVE & ACCEPT
17 shares